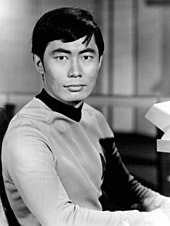 Takei graduated from Los Angeles High School in 1956 and enrolled at the University of California at Berkeley to study architecture. He later transferred to UCLA where he received both a BA and a master's degree in theater. Takei further honed his acting skills at the Shakespeare Institute at Stratford-uponAvon in England. Starting in the late '50s Takei regularly appeared on various television shows, including The Twilight Zone and Mission Impossible, and in a number of feature films. In 1965 Gene Roddenberry cast him as Mr. Sulu in Star Trek, a role he played for the duration of the acclaimed TV series (which ran from 1966-1969) and in the first six Star Trek films. Takei has since been a regular on the sci-fi convention circuit and has acted continuously, doing voice roles for animated shows and films, along with numerous guest appearances on TV dramas, sitcoms, and reality shows.  Continue . . .